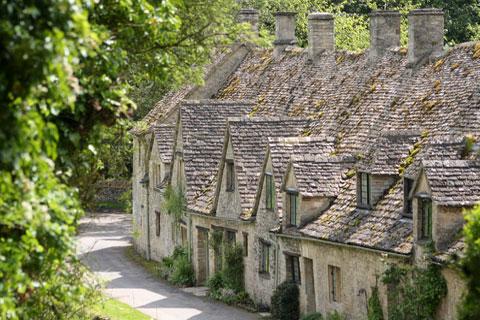 Bibury is a small Cotswolds village, located in Gloucestershire to the north-east of Cirencester. It is more or less the same village as Arlington, on the opposite side of the river.

The village developed in the 17th century as housing for nearby Arlington Mill, and much of the original character remains. The mill is no longer in operation, but the traditional Cotswold stone cottages in the village remain unchanged and unspoiled.

In the 19th century the village was famously describes by Wiliam Morris as the 'most beautiful village in England', and it is quite likely he would think the same today for little has changed in the intervening century.

Arlington Row, next to the river and facing a water meadow, must surely be one of the prettiest and most photographed scenes in the Cotswolds - but admiring it without a large number of other tourists being present will mean arriving pretty early, because it features in all the 'tour the Cotswolds' guides and attracts large numbers of visitors. Perhaps William Morris was doing the village no favours when he talked of Bibury as the prettiest village...

The small River Coln also passes quietly through the centre of the village, crossed by an old stone bridge next to the Swan Hotel.

Wandering through the village, the other main sight in Bibury is the saxon Church of Saint Mary, dating from the 8th century but with many changes made in later centuries (including some highly regarded 20th century stained glass windows), at the heart of the village and with an ancient graveyard to wander around.

Visit near to Bibury

Bibury Trout Farm is a local thriving industry based on the Coln River, where you can see hundreds of trout being raised. There is also a chance to buy fish, a gift shop etc and a chance for the children to try their hand at fishing.

Map of Bibury and places to visit