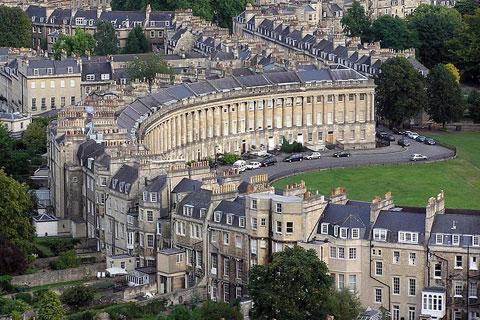 Bath is a 'city' situated to the south-east of Bristol in the county of Somerset. It is one of the most fascinating towns in England for visitors, with a wealth of important historical monuments and buildings spanning 2000 years set against a backdrop of impressive Georgian architecture.

It is also one of the most popular cities in England with visitors, and the city centre is a listed English Heritage Site, one of only 16 in the country. There are numerous parts of the city that deserve your attention when you visit: museums and art galleries, upmarket shops and boutiques, cafes and restaurants... Some of the 'unmissable' architectural highlights in Bath include:

Bath Abbey is a substantial building in the heart of the old city, constructed in the Gothic style between the 12th and 16th centuries on the site of an earlier church.

The Roman Baths are a substantial complex of buildings, developed by the Roman around a spring that supplies hot spa water. (The benefits of the spa had also been appreciated by the celts more than 800 years before the Romans). Note that the original Roman buildings around the spring have not survived and the buildings we see today date from the 18th - 19th centuries. The highlight is the central courtyard area containing the 'baths' surrounded by classical style clumns and statues on the terrace above.

Numerous artefacts found here dating from the Roman era can be seen in the associated museum at the Roman Baths. Although visitors are no longer permitted to bathe in the waters, you can drink the water in the adjacent Grand Pump Room, an impressive 18th century mansion house that also has an upmarket restaurant. As with the buildings of the Roman baths, the Grand Pump Room incorporates neo-classical architecture. 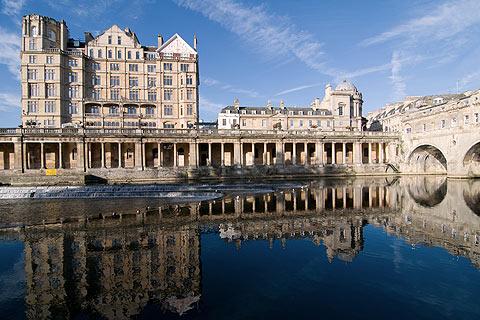 The Royal Crescent in Bath comprises just 30 Georgian houses, in an elegant curve around an open grass area - and is one of the most famous and beautiful streets of Georgian houses to be found anywhere, with the facade decorated with neo-classical ionic columns and constructed in the local yellow stone. Constructed between 1767 and 1774 almost nothing has changed (externally) with the houses since.

Note that the consistent appearance is only 'skin deep' - behind the facade there is great variety in the style and size of the individual properties. visit the museum at number 1, Royal Crescent to learn more about how the properties would have originally been decorated.

The above mentions a few of the highlights, but the city centre in Bath contains numerous streets of fine Georgian architecture and other examples such as the Assembly Rooms, the Circus and Queen Square following the grand design of John Wood the Elder for the city centre. One particular afvourite is the Pulteney Bridge across the River Avon, again late 18th century and just one of a handful of bridges in the world to have shops running along both sides of the bridge itself.

If you are interested in the Georgian architecture in Bath a visit to the 'Building of Bath Collection' is recommended. Situated in an 18th century church, the museum has an interesting collection of exhibits and pictures showing both the development of Bath and the building and furnishing of the houses.

Map of Bath and places to visit