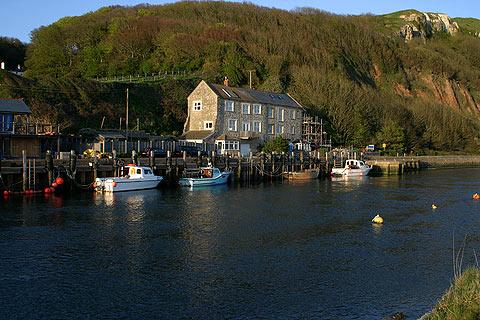 Axmouth is a village and harbour a little way north-east of Seaton in south-east Devon where it forms part of the extensive Jurassic Coast. the village itself is at the upper end of the estuary, about half a mile from the sea.

It was once one of the most important harbours on the coast of south-west England, a role that it lost in the 14th century when a part of the cliff fell into the harbour, and it is now only used by small boats and people using the Axmouth Harbour Yacht Club.

The village is small, centred around an attractive church (the Church of Saint Michael) and pleasant to explore with a pub or two to divert you along the way.

Axmouth village is often visited as part of a walk along the coast from Seaton.

Map of Axmouth and places to visit