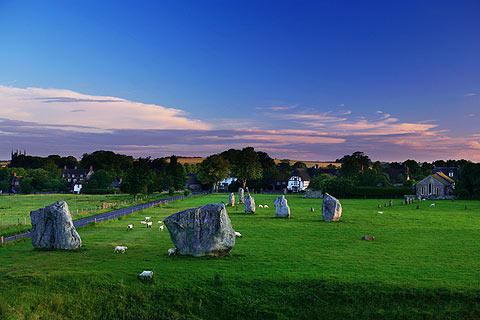 Avebury is a small village in the centre of the county of Wiltshire to the south of Swindon and west of Marlborough.

A pleasant enough village, Avebury would perhaps go unnoticed - if it didn't also have one of the most extensive collections of prehistoric monuments in Britain right next to the village.

The highlights within the village itself include the church, and also the National Trust property of Avebury Manor and Garden, an attractive 16th century manor house and associated gardens, best known for their topiary.

Broadly, the monument at Avebury consists of a very large circular raised bank and ditch called a 'henge' (427 metres across) which contains a large stone circle almost as extensive as the henge, and two further small stone circles. The original purpose of the formations at Avebury and surrounding region, as with those at Stonehenge to the south, remains unknown despite much speculation.

There is also an avenue of stones called 'West Kennet Avenue' which leads to another prehistoric monument on nearby Overton Hill (known as Sanctuary), and traces of various other stone formations and monuments: other important monuments near Avebury include those at Windmill Hill, a little to the north with a series of ditches and burial mounds; Silbury Hill, at 37 metres high it is one of the largest prehistoric mounds in the world; the stone burial chamber at West Kennet Long Barrow

Unfortunately in the 17th century a great number of the Avebury stones were buried, removed or destroyed (both for building and because of their pagan associations), which diminishes their impact rather - although great efforts were made by Alexander Keiller in the 1930's to re-establish and re-erect the fallen stones as far as possible. The museum and gallery at Avebury exhibits some of the further discoveries made by Alexander Keiller.

The Avebury site as a whole is fascinating - and among the most important prehistoric sites in England, as recognised by its listing as a World Heritage Site.

Map of Avebury and places to visit