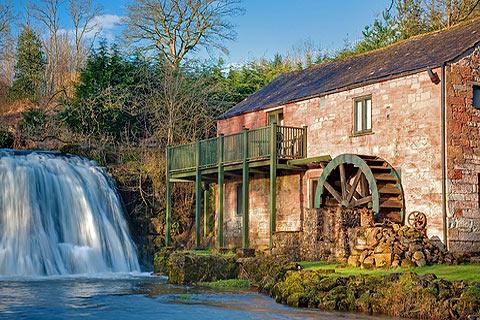 The small market town of Appleby (full name Appleby-in-Westmorland) is situated in Cumbria, outside the eastern border of the Lake District.

Appleby is centred around a broad open street, Boroughgate, that runs straight with the the castle entrance at one end and the church and 19th century cloisters at the other end. The ends of the street are also marked by two obelisks - High Cross at the castle end and Low Cross at the church end. Boroughgate itself contains many interesting buildings and is well worth a visit.

The most important monument in Appleby, the castle that overlooks the town, is unfortunately not open to the public, at least for the time being. Appleby Castle has an impressive 12th century defensive tower and a later mansion house (mostly built in the 17th century), the whole ensemble surrounded by substantial defensive walls and set in extensive gardens.

The other main building is the Church of Saint Lawrence, originally built in the 12th century but modified many times since, which contains an organ dating from 1683 and said to be the oldest functioning organ in England.

Appleby tourist office is based in the 16th century black and white building called Moot Hall in the middle of the road at the church end of Boroughgate and have a leaflet giving details of the highlights in Appleby itself and also activities nearby.

The town is not far from the Lake District, parts of the Yorkshire Dales and the North Pennines Area of Outstanding Natural Beauty, so visitors will find it easy to find a scenic detour...if you are, head to nearby Rutter Falls (photo at top of this page) while you plan what to do next!

Appleby is also well known for its annual Horse Fair, held early each June for more than two centuries, where thousands of visitors, travellers and gypsies arrive for a week of horse-trading and transform the streets of this usually quiet town.

Map of Appleby and places to visit