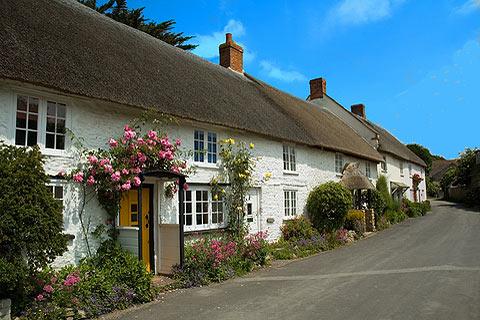 The village of Abbotsbury is located between Weymouth and Bridport / West Bay near the Jurassic Coast of southern Dorset.

The location has been occupied since the Iron Age as evidenced by the site of an ancient fort on the hill above the village. Be sure to go to the top of Abbotsbury Hill for some of the best views across the village and coast.

Abbotsbury is best known for the large number of quaint traditional thatched cottages within the village, and for several other notable highlights. The village also attracts artists and craftsmen, and there are plenty of small shops, cafes and restaurants to discover as you explore.

Note also the Church of St Nicholas in Abbotsbury, a Grade 1 listed building, and the stone terrace houses - 300 years 'newer' than the old thatched cottages but still very pretty!

In the 11th century an important abbey was built at Abbotsbury, but is now sadly lost. The important tithe barn that was associated with the abbey can still be seen in the village - it is said to be the largest thatched building in the world - along with a few remaining ruins from the abbey.

The Saint Catherine's Chapel that stands above the village was thought to have been built for the pilgrims who came to the abbey - they chose a lovely spot and you should visit this sturdy stone building for the views as much as the chapel itself.

The other big attraction lies towards the sea, just behind Chesil Beach. The swannery is an important breeding ground and home for mute swans, while the extensive tropical gardens spread over some 20 acres and include a fascinating range of plants in a wide variety of gardens, from the formal to the very informal, and from walled gardens to walks through the woods. The garden is especially well known for its magnolias and camellias, and is lovely to explore - a definite highlighlight of a holiday in this part of Dorset for gardening enthusiasts.

The proximity of Chesil Beach and the seaside, the prettiness of the village and the important attractions nearby, the chance to explore the scenery of the Jurassic Coast and the countryside of this lovely part of Dorset all contribute to making Abbotsbury a very popular destination on the Dorset coast. Spring and autumn are also very picturesque and the streets a little quieter...

Map of Abbotsbury and places to visit